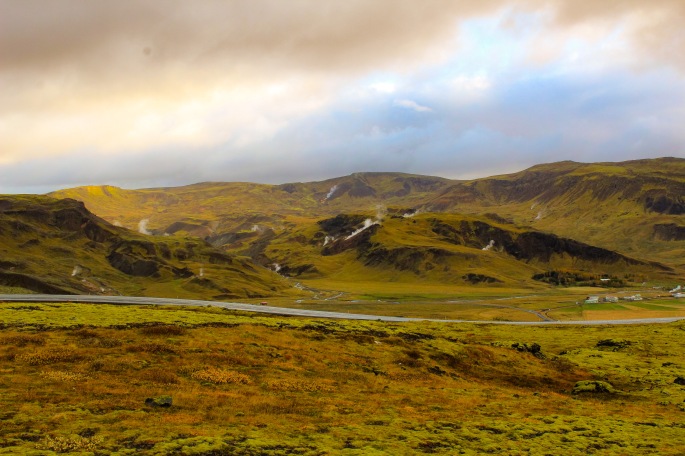 In Iceland, this phrase–“it all comes with the cold water“– is used when someone is being impatient…or so they say. It means something like…if you’re patient, all will fall into place.

This phrase pretty much describes our third day in Iceland when all things seemed to have fallen out of place; we were late…and yet…we were still rewarded at the end for making the most of it.

After our jaunt around the Golden Circle the day before, we were completely invigorated and in love with Iceland. We couldn’t wait for our next day’s adventures.

Unfortunately, when one is on vacation, the specific days of the week tend to be of less importance…hence I accidentally set my alarm for the wrong day of the week…which means, we were several hours late in getting our start.

We had such grand plans for an epic road trip. After a quick discussion, we decided to forego some sights and still go for the long haul to Jökulsárlón.

First Stop: Another Random Spot off the Highway

It had rained the night before so the morning still wore evidence of it. Everything was wet and green and black–and it was beautiful: the rain-soaked soil bore a stark contrast to the bright green of the moss-covered hills. And even more stunning were the fissures of steam escaping throughout the landscape like mini volcanic vents.

We had to stop and take a picture. 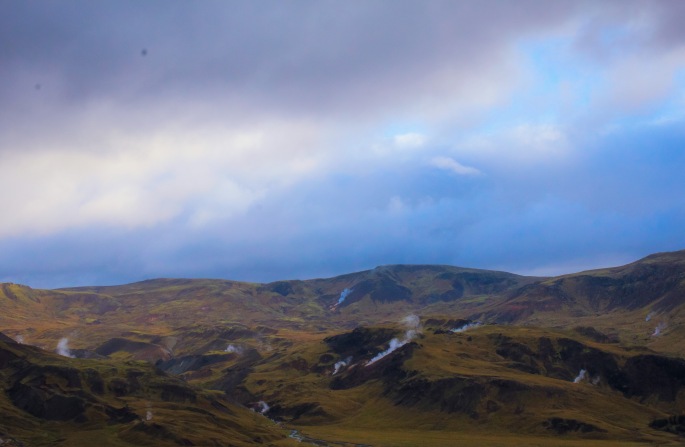 Our feelings are a little ambivalent about this stop. It was a good thirty minutes off the main highway and over a bumpy, unpaved road (good thing we had an SUV). On paper, this place sounded epic, like the one spot where all your Medieval fantasies come to life.

It’s where Iceland’s oldest Great Viking Hall is located: built some time in the 1100’s complete with an escape tunnel that narrows and lowers so that enemies chasing you would have to exit single-file and practically crawling head first (perfect for a beheading!).  Great Sagas were written about Keldur!

Instead, we arrive to a … farm?

A beautiful, scenic, functioning farm. Which, in retrospect, makes sense since back in the 1100’s, farming was probably the most lucrative and productive thing one could do. (Raiding probably had diminishing returns…) And it was pretty cool to see the “hobbit” houses (turf houses). 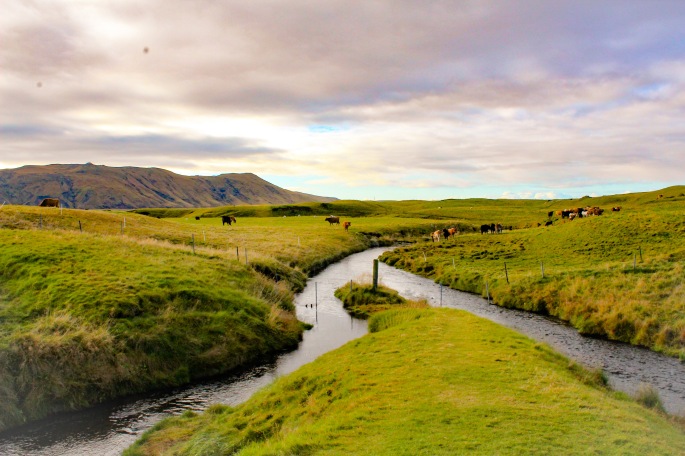 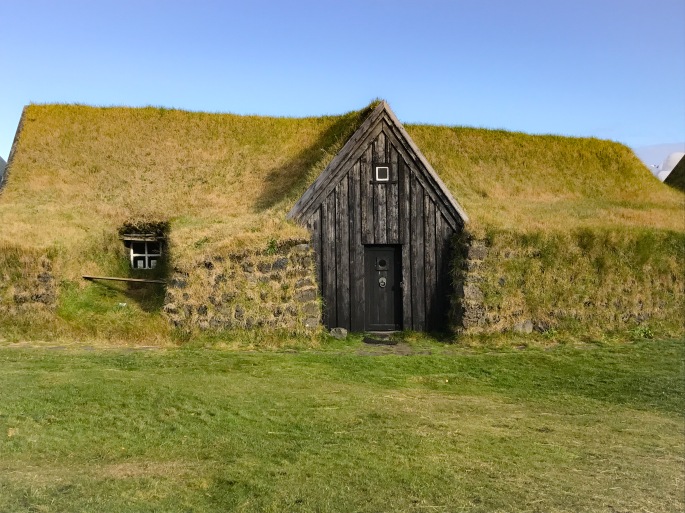 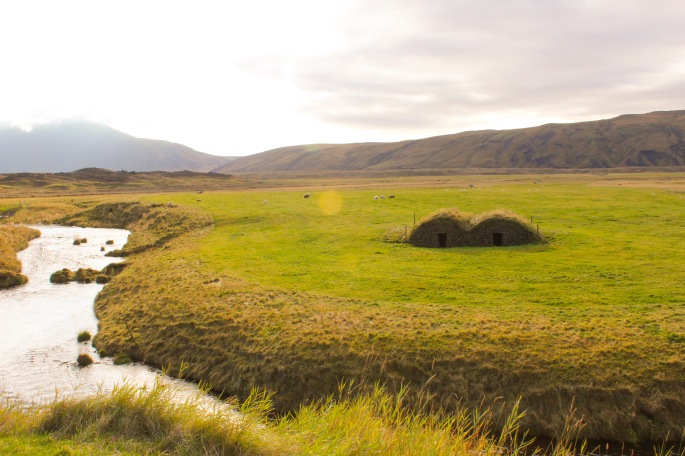 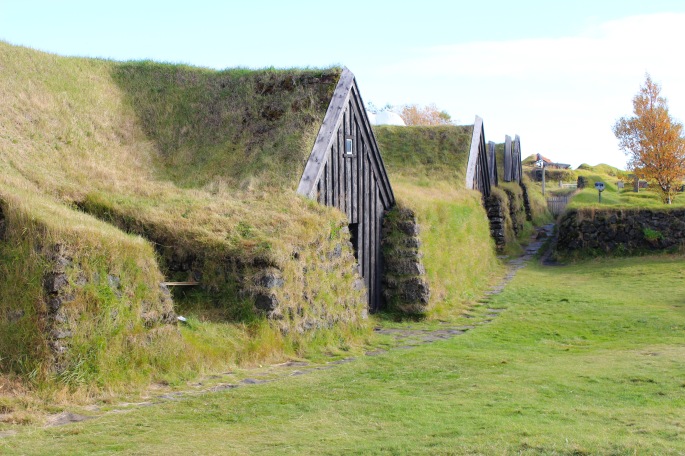 So now we know what a Medieval farm looks like.

Keldur is actually still a functioning farm to this day, and it’s kind of incredible how Iceland has maintained this land, honored it, and continues to use it.

And cold. But so worth it! This waterfall is known for being the one that you can go behind. It was just really fun and unique to get to go around a waterfall and see it from the “back” with very little hiking or effort. The line for the photo op is kind of long, though. Expect your turn to take up to 15 minutes.

One other cool thing about this place is that it is privately owned. It’s on someone’s land, and the owners just basically tolerate the tourists. They also have boxes for donation to maintain the area, and we threw in a few krona. 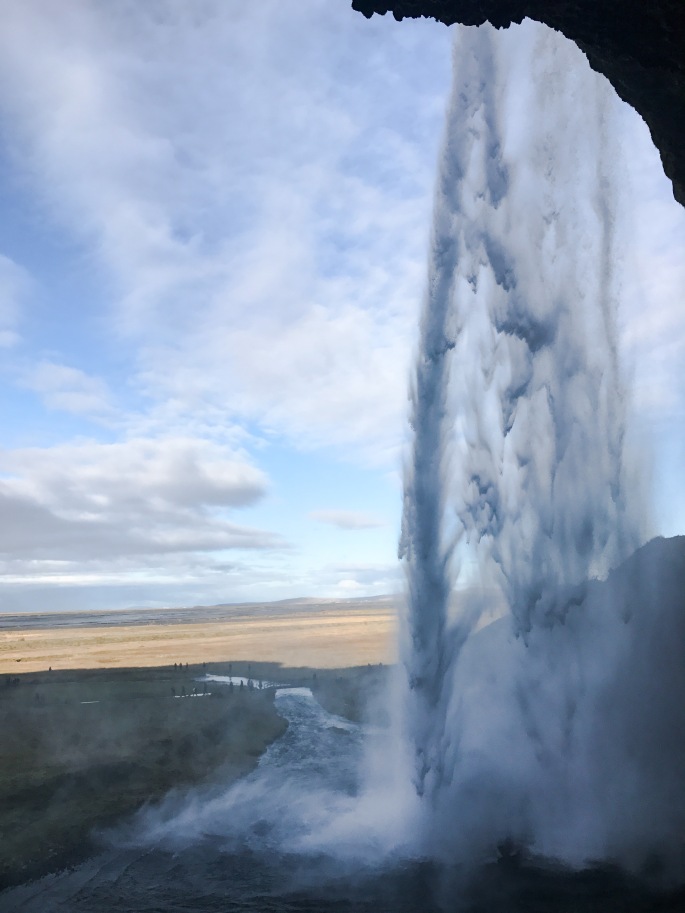 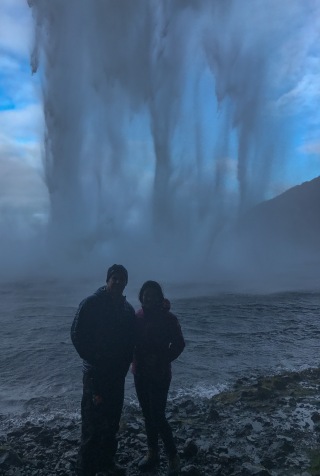 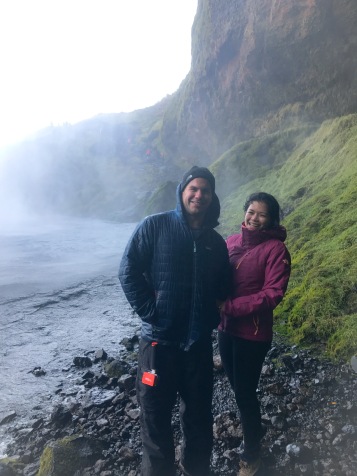 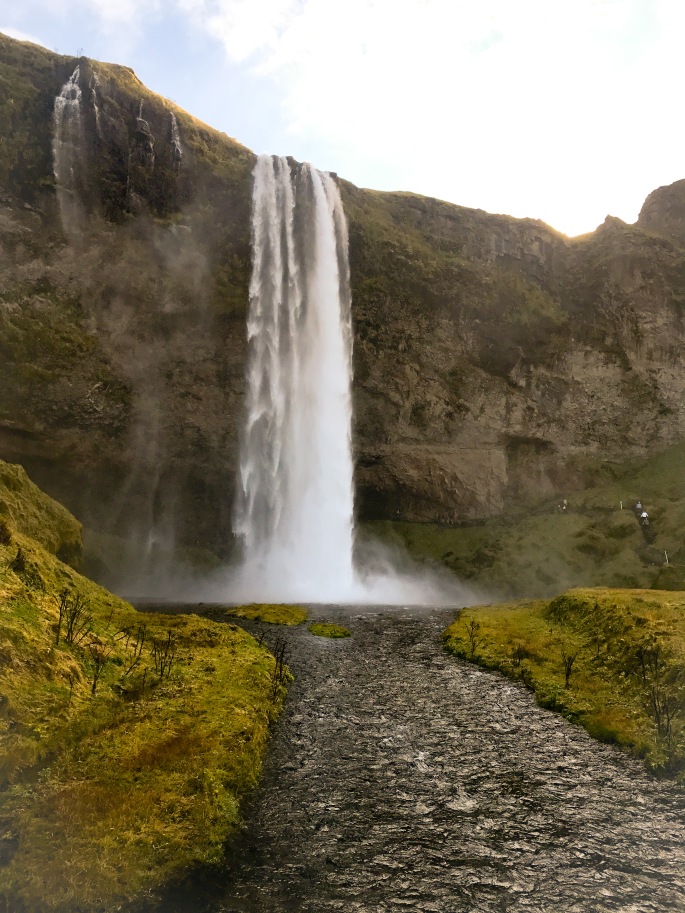 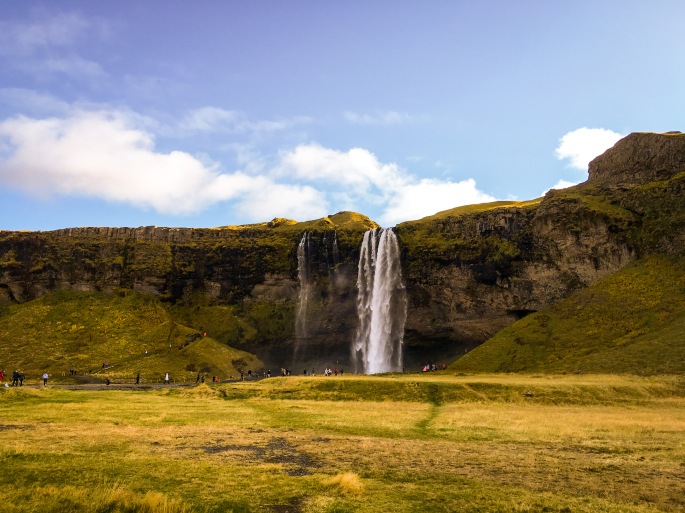 This is a fun, short stop. IF we hadn’t woken up so late, I’d have wanted to take a hike around the area. There were at least another four smaller waterfalls along the face of the cliff.

Unfortunately, our time and daylight was limited, so we had to continue on to our next stop.

We had a late lunch in the quaint small town of Vik. We had…hotdogs. Like our earlier posts about Iceland, we cannot emphasize enough how expensive eating out in Iceland can be. Our hotdogs (pyslur) cost nearly $6.00 each from the Kronan supermarket. It definitely made me miss the $1.50 Polish sausages from Costco in America.

However, Icelandic pylsur is one of the best hotdogs ever…they’re mostly made of Icelandic lamb, as well as pork and beef. It’s made even better with the condiments that traditionally go with it, especially with the crispy fried onions, and the “brown” sauce called pylsusinnep.

Unfortunately, we did not take any photos of the hotdogs we scarfed down. But I might write a quick blog about all the food we ate in Iceland, cuz boy did we eat some delicious (and some disgusting) things while there.

While stretching our legs at Vik, we took a short walk on the black sand beach just outside of the Kronan Supermarket.

Then it was back to a long stretch of road towards our main destination of the day. 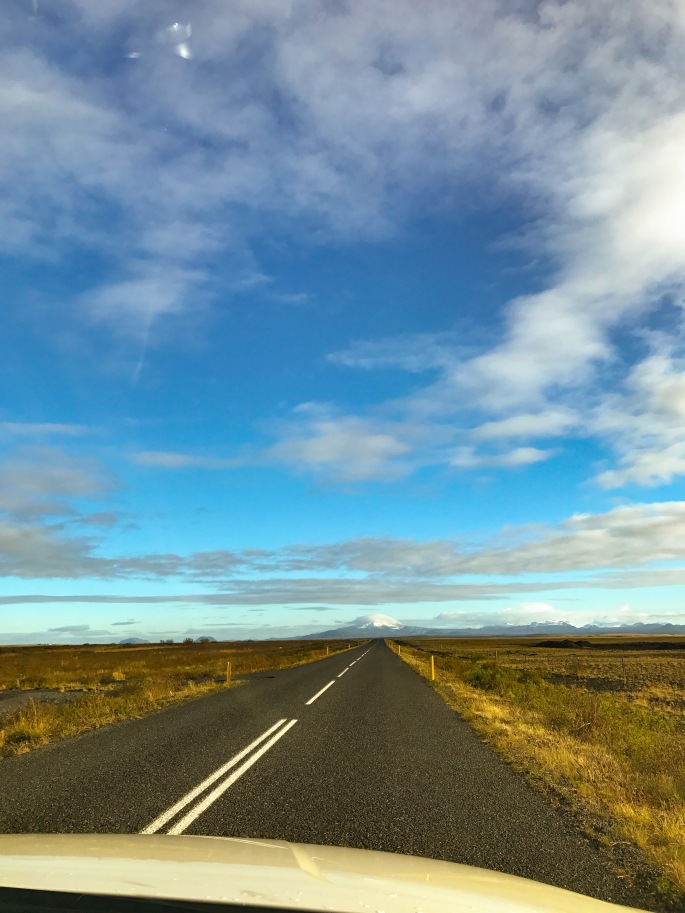 We drove over eight hours to get to this spot.

Jökulsárlón is a glacial lagoon with waters dotted with icebergs from the surrounding Breiðamerkurjökull Glacier, part of larger Vatnajökull Glacier. The Glacier Lagoon flows  into the Atlantic Ocean, leaving chunks of ice on a black sand beach. 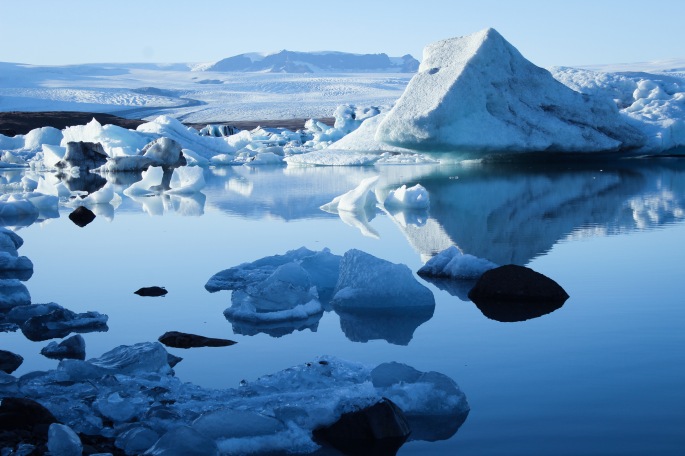 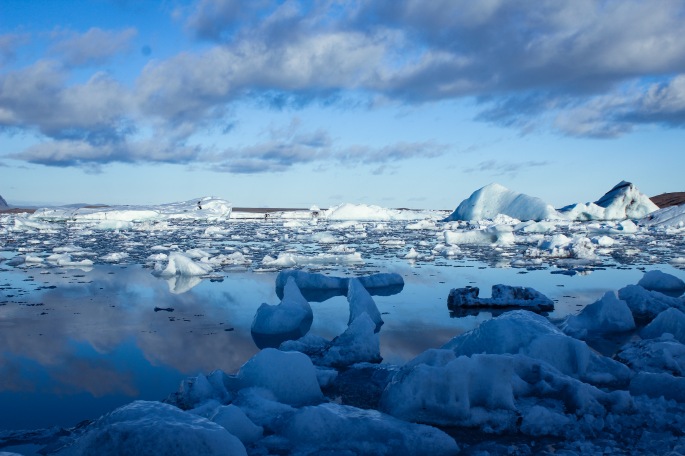 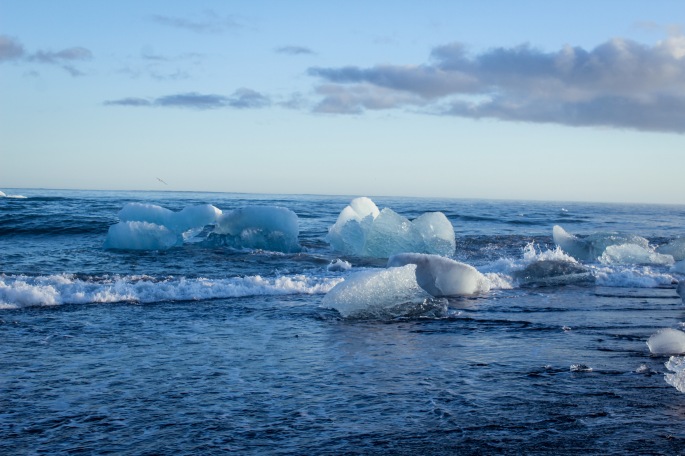 The Reward: It took us so long to get to our destination even when we skipped a few stops that the sun started to set while we were there. We were rewarded by a peaceful, ethereal, breathtaking, soul-healing sunset. 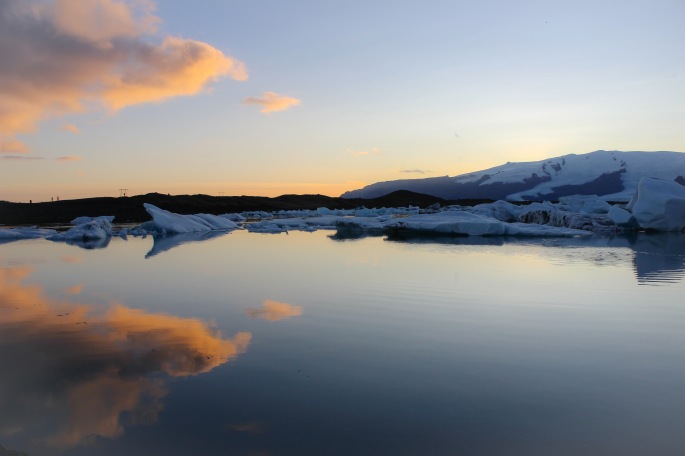 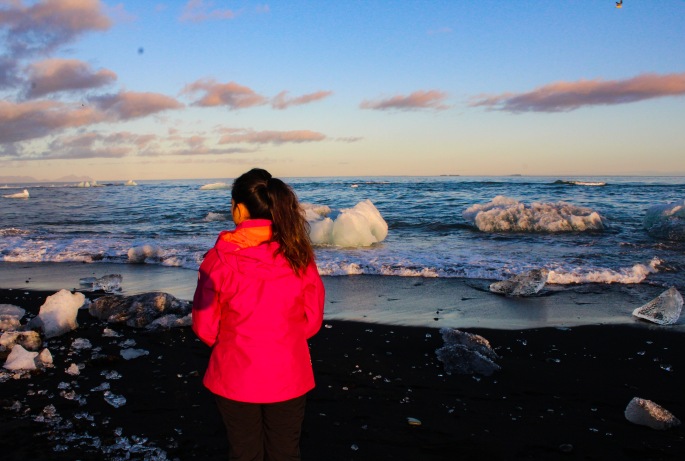 The temperatures dropped precipitously as soon as the sun went down the horizon, and we knew it was time to make the long, long drive back to our hotel in Reykjavik.

But on the way, we were given one last hurrah for patience and persistence: we got a glimpse of the elusive Northern Lights. 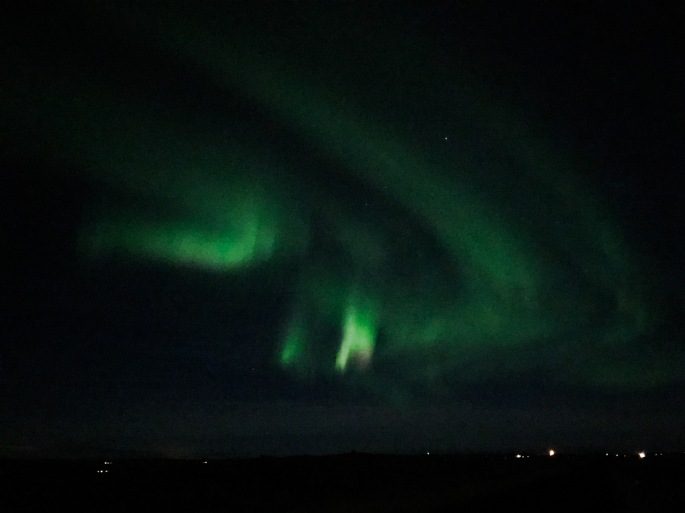 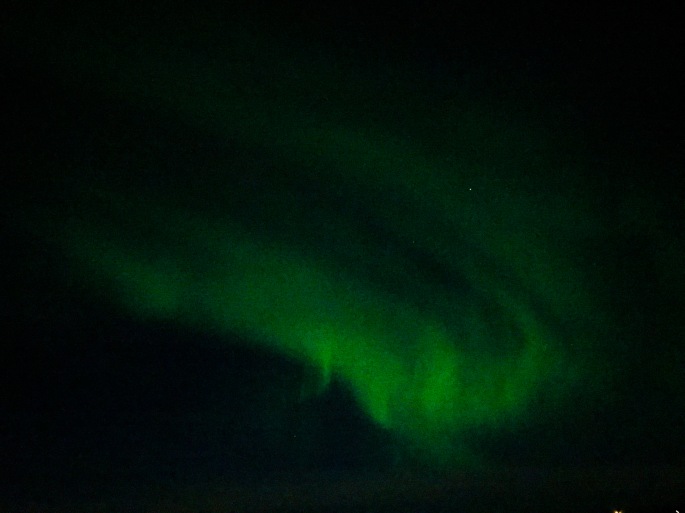 The photos are a bit grainy as they were just taken from my phone, and the moon was actually shining full and bright. It was sheer luck that we even saw them.

It was the cherry on top of a day that could have been ruined — but we decided to make the most of it anyway. It all comes with the cold water.

Whatever “it” is…it’s all beautiful in Iceland.

Read about our jaunt around the Golden Circle HERE.

This is a text widget, which allows you to add text or HTML to your sidebar. You can use them to display text, links, images, HTML, or a combination of these. Edit them in the Widget section of the Customizer.
Loading Comments...
Comment
×